How to train to be a Basketball Pro

There tend to be two types of people in this world. Those who grow up wanting to be professional sports stars, and those who complain that professional sports stars earn too much money. Admittedly, healthcare workers and the armed forces fulfil more meaningful roles, so you can see where people come from when they say someone like a top Basketball pro earns too much for what they do.

However, there are two reasons why that is. Firstly, a lot of this money comes from sponsorship deals, whether it be sports brands such as Adidas and Nike, betting companies like betonline, or even fast food chains like Subway. These are the people who help pay the wages and attract big name players. Although fans also contribute by paying for tickets to go watch live games. You wouldn’t get someone paying to fly over to a war-torn country just to watch soldiers shoot each other.

Curious About No Deposit Bonuses? Here Are The Ins and Outs of How This Works

The second reason is because they put a hell of a lot of work in. Yes, you may only see athletes running around the field, court or pitch they play on maybe one or two times a week, but so much more goes into being a top sports professional. Sadly, the closest many will come to playing Basketball in the NBA, is by checking out  games such as NBA 2K21. But if you really want to make it professionally playing Basketball, here is some info you may find interesting.

How many people make it professionally?

InspirationalBasketball.com no longer exists, but when they did, they conducted some research on just how likely it would be for young players to make it professionally in Basketball. Only 1 in 31 12th Grade players make it to the NCAA, and of those who make it in the NCAA, 1 in 365 players make it to the NBA. Those odds increase even further for 12th Graders who go straight to the NBA with only 1 in 3249 making it. So it’s not something everyone is going to achieve, you’ve got to be pretty damn good to go all the way.

If you’re determined enough that you can play with the best of the best in the NBA though, then here’s just a glimpse of what you’ll have to do, day in, day out.

As we stated earlier, you’d be forgiven for thinking Basketball players don’t do much only being able to see them play every now and again throughout the season. But there is a lot of training involved, and it is a lot of hard work. You’d also be forgiven for thinking players only train from match-to-match during the season too then have nice long holidays, but, players also train during the off-season too. As they only have short careers and need to keep as fit as possible.

Whilst they do train in the off-season, things tend to be a little more relaxed, although some the greats will not ease up much as they train to get themselves ready for the upcoming campaign. Pushing themselves to become better and better all the time.

Here’s some of the key areas that the top Basketball Pros will work on during the off-season: 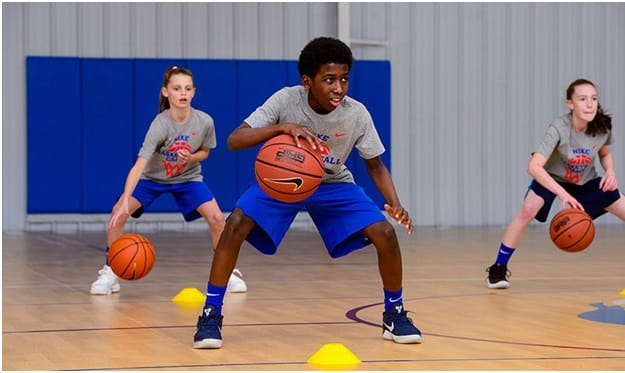 Once the season starts to begin again, with some early pre-season matchups, many NBA players will still do a lot of the above, however, all the exercises will intensify. Then, on top of that, players will be training for every upcoming game that they have during the season.

The way in which training usually goes is they’ll have off day work, and game day work. Off days will see them go through conditioning training, gym work and some hooping in between the match days. With things like therapies for any injuries and watching game footage to analyze performances in between. Basketball professionals can go train for as many as 13 hours a day, with breaks for lunch and dinner in between.

Because when they have a match on game day, the training tends to be a little lighter. NBA players will usually wake up earlier to get training in because the evenings will be taken by actual matches and the build-up around them. With more focus on activities like shooting and skills before the match, as they don’t want to tire themselves out before the big game.

With all this combined, the average professional NBA player can easily put in 50-60 hour weeks. Then the greats will probably add another 10-20 hours on top of that because they try to push themselves to be the best.

You may not think about it, but you also have to train yourself mentally for playing Basketball too. You’ve got to believe you can make it to the top, believe you’re the best sports professional out there on the court. You’ve got to have that drive and determination to go all the way. However, it’s also important that you don’t become over-confident, and that you don’t get too big for your boots thinking you’re better than the other players on your team. Because Basketball isn’t an individual sport. It’s a team game.

Any team can have a greater player, but if there is poor chemistry in the squad, you’ll end up failing. So it’s important to work on self-control. This will also help you with sticking to strict routines, following proper diets and helping you to remember to act accordingly at all times.

A lack of self-control and discipline can often be the reason why many players fail to make it. Because coaches don’t want cocky young players who can’t work with a team, or fail to back up what they say they can do. For this, exercises like mindfulness can be extremely helpful. Many top franchises even hire sports psychologists now that help elite athletes with the mental side of training to become and succeed at being a top Basketball professional.

There you have it

Maybe we haven’t convinced you that Basketball professionals deserve the pay they get, but hopefully now people realize how much time and effort these top athletes put in to get where they are. And if you’re a young inspiring baller, now you have an idea of how much it takes to go professional, so it’s time to slip on some Jordans and get practicing so one day, you could be the next LeBron James or Michael Jordan.

How to Choose Electric Drums for Kids

FiveWays to Handle Stress during the Initial Year in Nursing

FiveWays to Handle Stress during the Initial Year in Nursing

3 jobs you can do without leaving your bedroom

Tips For What To Financially Avoid