The Top Trending Drones of 2018

So far 2018 has been a year of awesome drone trends. Popularized by many Youtubers, and supported by the rapid-growth of drone technology, the industry is shining brighter than ever.

Last year companies such as the power-house DJI, have given the first significant steps in manufacturing and selling breathtaking HD and 4K foldable drones. Thus, combining current product tendencies (light and easy to carry products) with modern day drones. The company, that is widely known for its famous Phantom model, released DJI Mavic, DJI Spark, and DJI Mavic 2, in this order. Drones that are highly focused on portability and camera quality. Both lines went viral among drones lovers, as for the first time people could bring a drone packed with great feature, camera, and advanced technology right in their backpack with ease. This foldable design has “copied” between other low-cost drone manufacturers such as JJRC and others. Thus, creating this on-growing trend of foldable design + incorporated camera + light weight.

Another Big Trend in 2018: Autonomous Drones

This is not a trend that popped in 2018. It has been alive and well since 2015/2016. It meets the human nature as we know it, people want autonomous technology, drones that can avoid obstacles and flying without pilot input. The industry is rapidly growing on that path, however, it’s too soon even for cheap drones under $200 to already have such characteristics. On the other hand, drones such as the ones previously mentioned, Phantom, Mavic, and Spark. This is why they have become so popular even among casual consumers and non-hobbyists. With just the swipe of a finger either of these drones can swiftly fly autonomously. Meanwhile, pilot watches the Live Video directly on a High-Res screen. The same way people like their phones being smart, they also want their drones to be smart as well. 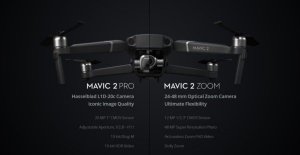 Very recently DJI announced the new upgraded version of the Mavic 2 line, the Mavic 2 Pro and Mavic 2 Zoom. Everyone is hyped about these upcoming drones that promise to bring the drone industry into a new era. Besides the expected development of the camera, DJI is also introducing an amazing 31 minutes of flight time! Better then any other quadcopter they have produced in the past by far. This is yet to be confirmed, but if DJI pulls this one off, it certainly is an extra point in the view of the customer. Even more surprisingly is the control distance. In their official website, DJI states Mavic 2 will have a maximum flight distance of 18km at a consistent 50kph (31 mph) if no wind. However, live video transmission stops at 8km. Therefore, after 8km pilot would be flying blind (or using auto-pilot).

In my opinion, this trend of foldability, camera-focused technology, and autonomous control will remain until the end of 2018 and follow to 2019. This is the age of portability and photography and videography. Makes only sense that the drone industry mirrors our culture. What is your opinion? Let us know in the comment section below! Have a great day and don’t forget to share this article.

How To Make Conference Call On Android? [With Pictures]

How To Make Conference Call On Android? [With Pictures]

Protection of Trade Secrets: Why it is Important for Business