Bleedings are scary for us. We get scared when we see the flow of flood. Red blood gushing out of our body can send chills down anyone’s spine easily. But some bleedings can be normal and a part of the process. Like menstruation of girls and women are quite natural. It is a part of the natural body cycle and is quite unpredictable to some extent. Just like menstrual bleeding, implantation bleeding is quite natural and is one of the first stages of life development inside the womb. Implantation bleeding is one of the early signs of pregnancy. Among the doctor’s community, some believe that the bleeding occurs when the embryo first attaches itself to the uterus of the mother.

Do you have tight neck muscles? Try Saunders cervical traction to help with your posture

Computer Tomography: What is Tomography for in Orthopedics?

Benefits of using a multifaceted approach at alcohol treatment centers

Implantation bleeding means the bleeding occurs because of the attaching of the embryo to the uterus which discharges to a specific amount of blood to accept the hold the embryo. However, everyone not experiences this bleeding and spotting when the embryo attaches itself to the lining of the uterus. The fertilized egg or the embryo moves around and when it attaches itself, it results in light bleeding and it should not require any medical attention. Around every third pregnant experience this according to the studies and it should not be confused with the menstrual period as both are very different. There might be a question how long does implantation last? The implantation bleeding is generally short and occurs after 8-14 days of conception or around the time the woman missed her period.

The color of the spotting may also be different like pinkish or orangish because of the vaginal discharges and if old, the blood maybe brownish due to oxidation. It is always better to share these sets of information with the consult the doctor as he would be able to provide the best solution. Implantation bleeding looks more like than any woman’s menstrual bleeding. As it is an uncontrollable and unpredictable act, some women will have more blood flow than others. Implantation bleeding is treated through a process. It is best to share it with doctors as they will eliminate most unwanted things like polyps and treat the bleeding. 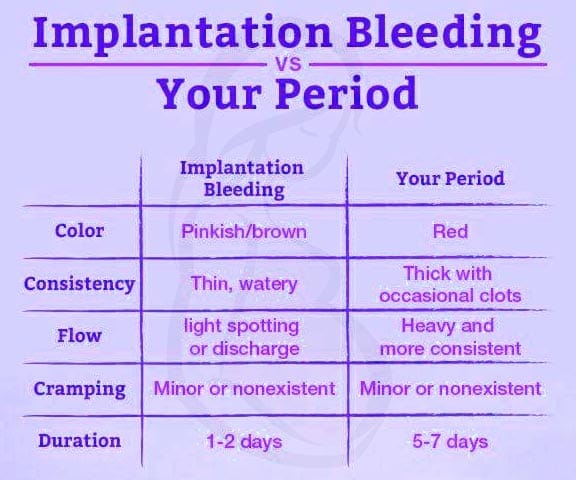 Essential differences between the two types of bleeding:

When Does Implantation Bleeding Occur?

Implantation bleeding is quite different from menstrual bleeding. Menstrual bleeding occurs after 11-14 from ovulation (when the fertile egg is released and conception is possible). This can get easily confusing as and many women misjudge the reason for bleeding thinking that their menstrual period is early a few days. Implantation bleeding usually happens one week before the menstrual bleeding. Women are acquainted with their normal flow of blood during menstruation and without any change in medicines like birth controls or change in stress level, the kind of menstrual flow should not change. So, when they experience the blood flow to be less and the color of the blood different. It can ring a bell for them.

Implantation bleeding in some cases may stop after a few hours and in some cases it may continue till 2 days. Implantation bleeding, as explained earlier, happens because of the implantation process of the embryo on the walls of the uterus. Women who are into pregnancy for the first time tend to bleed a little more than the women who had egg attached to the uterus before. The first time walls of the uterus are aggravated and it bleeds more and with subsequent times the bleeding reduces.

Things to look out during implantation bleeding

It has been seen that about half of the pregnant woman experience implantation bleeding and spotting during their pregnancy. 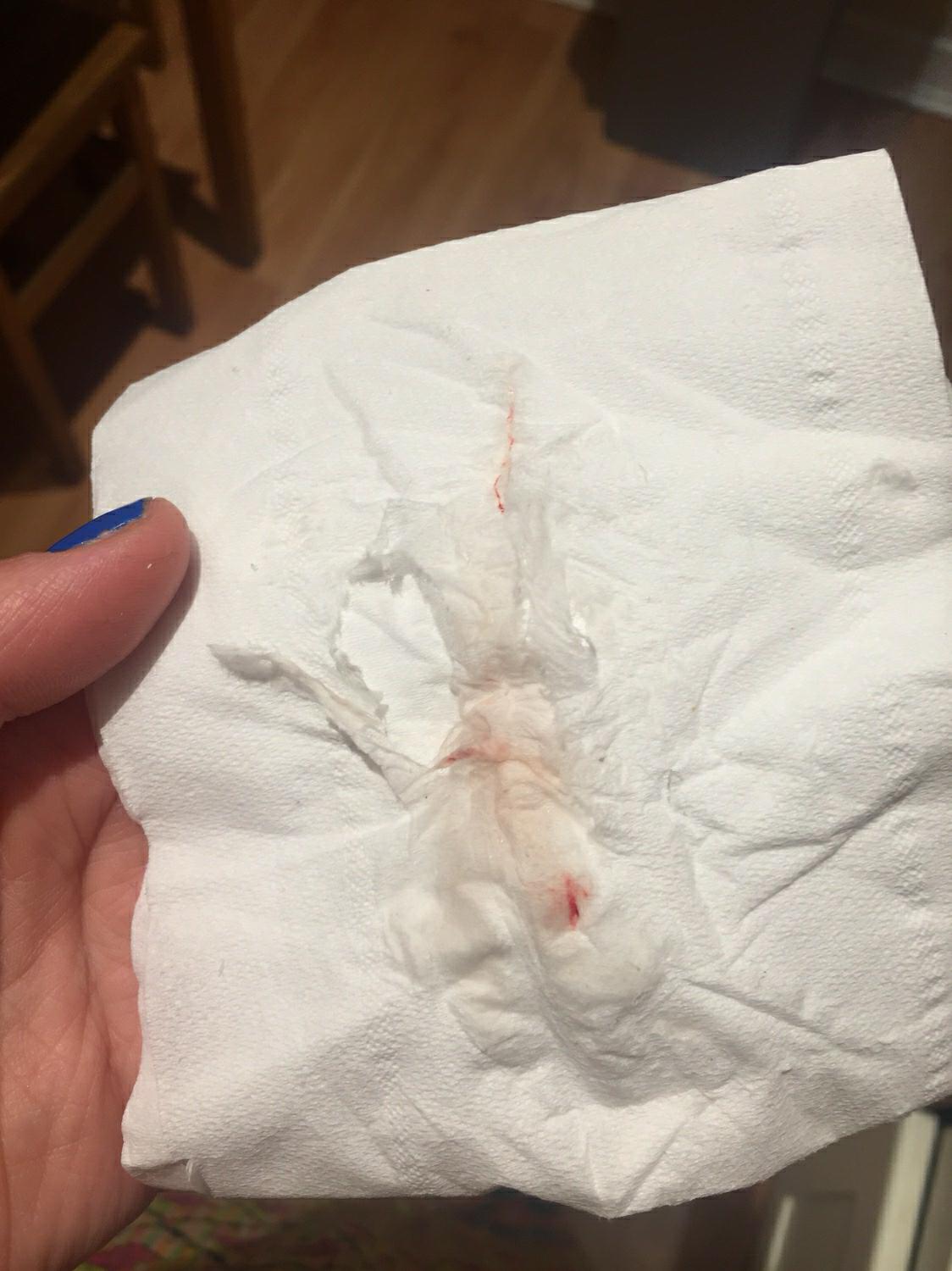 But if the woman experiences extended bleeding and in large amounts, it can be a sign of Molar pregnancy or miscarriage and for this reason, the matter should always be presented before the examining doctor to look into and examine the patient thoroughly. Every minute detail must be brought into the knowledge of the doctor be it any symptoms the doctor would be able to understand the situation more carefully. Women might experience nausea, vomiting, dizziness and abdominal pains during their pain and there can be chances that the person is experiencing an ectopic pregnancy. Cramps are a part of the pregnancy but if anyone feels that the pain of the cramp is increasing day by day, the person should bring it to the doctor’s notice as it can mean May things.

Pregnancy is the conceiving of the embryo within the uterus and helping it develop till it forms a full-fledged body. There is a specific time for the conceiving of the embryo and the development of the body within the uterus but it has been seen that consistency and the color of implantation bleeding differs from person to person and from pregnancy to pregnancy. There might be some confusion regarding the pregnancy. But this is the scenario where not a single confusion is appreciated one has to be 100% sure. So there are other symptoms to make you certain about the present situation. These symptoms can be together analyzed and then the conclusion can be drawn on whether the fact is correct or not. Other symptoms can include:

It is always better to act in a composed manner. Doing works in a hurry can cause stress problems. Wait for three-four days after the bleeding or the spotting has stopped. If a woman is going to do pregnancy tests just after the missed period and implantation bleeding, it might be too soon to offer the conclusive results. It is ideal to wait for a week before testing pregnancy as it can yield more desirable results.

The correct time for a pregnancy test 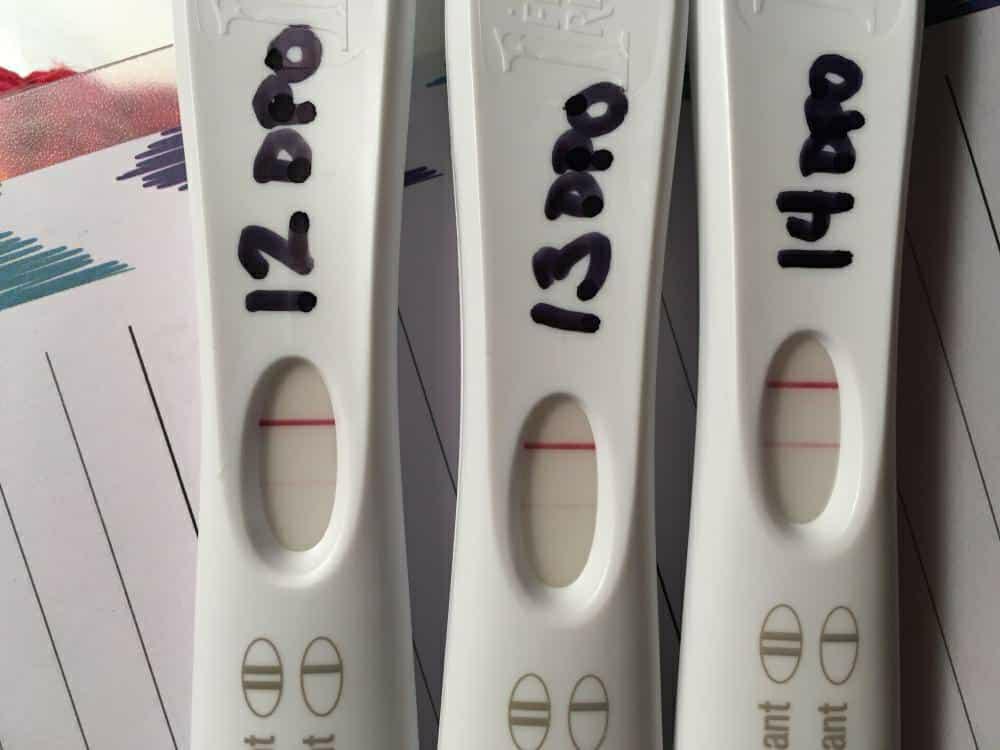 A pregnancy test can be done anytime you want but the accuracy of the result would be unknown. Nowadays home pregnancy tests are also available and they are claimed to be 99% correct. Tests of this kind usually check the human chorionic gonadotropin (HCG) right after the first day of the missed period. The hormone tends to double its concentration after two-three days in the case of early pregnancy. The sooner the positivity or the negativity of the result depends upon the time since the embryo has implanted itself inside the uterus. The accuracy of the result also depends upon the closeness of the date of your menstrual period. If the woman is close to her menstrual period date than the accuracy of the test result increases. Women also try to test if the period is late or if they have several early pregnancy signs but for either of the cases, reliable results are obtained after waiting one week from the date missed for a menstrual period.

If the results are not satisfying or the woman wants to be more than sure than she should go for a blood pregnancy test after consulting the doctor. The readings of the concentrations of hCG reach the blood before the urine so a blood test will yield more positive results than the urine test ever will. The blood test results are always more accurate and satisfying than urine tests. Home pregnancy tests can sometimes yield wrong results.

Proper consultancy with the doctor

The major step that one should be taking while pregnant is being under strict and correct medication. They should consult an experienced individual. Complications and other requirements can easily be figured out if the individual go through the correct tests and consume the correct medicines from time to time. It is an important step to open up to the doctor, for any kind of bleeding or when the mother is sensing any kind of abnormality that is something to worry about. The doctor should be well aware of the mother’s present situation and also have a detailed account of the mother’s past record. Minor bleeding, while you are pregnant, does not always mean that the result is negative; still, it is always a safe option to take advice from an experienced professional.

Hence while testing the pregnancy at home, it comes positive, it is always said that the next step should be consulting a doctor. If the test happens to be positive, the doctor gives you a proper medication chart and also some valuable advice in family planning. They confirm the accuracy of the test undertaken by you at home. The advice on the family planning also includes the navigation of the methods of care that should be taken as a parent and also discussing the various choices that are available these days to a modern-day parent.

The process of implantation bleeding can be considered to indicate potential pregnancy. When you are waiting for your period but, you did not have your period on time and have undergone a pregnancy test at home. If the result delivered by the test is found to be negative, then the chances for you for not being pregnant is much more. Keeping a record for the process of implantation bleeding is good when one is trying to get pregnant. It is seen that a lot of women do not actually notice or they also have not experienced the realization of the happening even if it occurs. It is seen that the color and the process of implantation bleeding varies from one person to another. The process and the symptoms are not always the same. The symptoms are not always capable of determining whether a woman is pregnant or not. Some individuals may have all the symptoms and yet not get pregnant on the other hand; some individuals may not have any of the symptoms and yet be pregnant. Hence, it becomes extremely difficult to just rely on the symptoms for the assurance of being pregnant. Missing the regular menstrual periodic cycle is an important way to determine one is actually pregnant or not. Yet, in case one has an irregular period, it again becomes difficult to determine pregnancy.

There are various researches done and various schools have provided piles of information for the occurrence and the working of the process of implantation bleeding, which is also accompanied by the keynotes of pregnancy. Pregnancy is a very delicate point and it is extremely important for the mother to take adequate care for herself and the baby. Proper consultation and performance of a series of proper tests need to be undertaken to ensure the good health of the mother and the child. Tests performed at home through pregnancy test kits, which are now a day’s easily available in the medical stores aren’t something you can always rely upon. Circumstances may lead to deliverance of the wrong result, with uncanny and unexpectable consequences. Hence, it is very important to get yourself sure and satisfied by consulting a proper gynecologist.

When does Implantation Bleeding Occur

Do you have tight neck muscles? Try Saunders cervical traction to help with your posture

Computer Tomography: What is Tomography for in Orthopedics?

When does Implantation Bleeding Occur

How You Can Learn to Grow Your Business

A Peaceful Separation: 9 Tips for a Smooth and Amicable Divorce