What is the Cabbage Soup Diet?

Cabbage diet soup, an eating plan is a rapid weight loss diet. As the name implies, the diet revolves around cabbage soup for seven days and as a result, says its proponents, you can lose your weight up to 10 pounds, i.e. 4.5 kg. Though the health experts warn that the diet is not healthy and sustainable, many people follow this because of the faster results it provides.

In the diet, for one week you have nothing but large quantities of homemade cabbage soup, which is the centerpiece of the diet. You can also have 1 to 3 other food items like skim milk, fruits, and vegetables each day. Cabbage soup diet is a short term one and is intended to last no longer than a week. It is only for the purpose of slimming down immediately or as a jump-starting for longer-term diet plan in life.

Since the 1980s, cabbage soup diet is popular and struck around even today. It is also called by the names such as Sacred Heart Hospital Diet or Mayo Clinic Diet from the assumption that it was developed there. However, the entailed hospitals rejected these claims. In fact, according to Mayo Clinic cabbage soup diet is a type of fad diet, that is not effective as much as the other long-term weight loss. Even so, the amazing results it could make in a short period of time appeases people who want a quick fix. Some of the other interesting names cabbage soup diet have are: 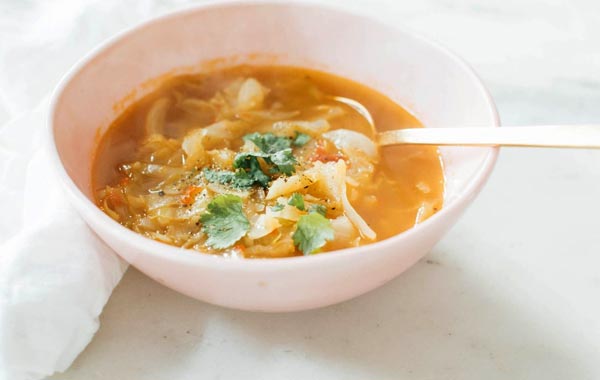 Cabbage soup diet is considered to be the oldest fad diet which is still popular and in use. No one exactly knows when or from where the cabbage soup diet was first formulated or who was its originator. The American Dietetic Association’s timeline of fad diets says, cabbage soup diet originated around 1950 or maybe even before that. It was the recipe for “Doughboy Cabbage Soup” in World War I (1914-1918) when American soldiers have few vegetables and were eating cabbage in the diet as a protection against scurvy, a disease caused by a deficiency of vitamin C in the diet. The name “Military Cabbage soup Diet” is likely to be derived from this context.

In the 1980s it was revived and has become more popular. During this period, it was passed on in the form of photocopies. Later in the 1990s, the diet was attributed to various health associations and hospitals where they gave the diet to overweight patients who are preparing for operations or surgeries, especially heart surgery so that they can lose their weight quickly before the surgeries. Slowly people realized its benefits and began to follow this diet plan for a quick weight loss.

Who can follow Cabbage soup Diet and who can’t?

The cabbage soup diet is a short-term diet plan and is intended for those who are looking for a short-term solution for their excess weight. It is not devised for no longer than one week. It is fine to incorporate some of the recipes of the diet as a part of a balanced diet after the week is up. Since the diet includes almost everyday food items, it is relatively inexpensive, especially a lot of cabbage. One of the reasons people quit this diet is the taste of the soup which they can’t stand.

The diet is not for those who have a chronic illness like heart disease, diabetes, or those who have specific dietary needs with restricted food limitations. Since the diet is involved with a lot of restrictions, it is not good for the people who are around 60 to follow it as it may badly affect their metabolism.

How does it work?

The cabbage soup diet has different versions. However, the basic premise is the recipe for homemade fat-free, protein-rich cabbage soup. It further includes low-calorie foods to eat on specific days.

The soup includes cabbage, canned tomatoes, onions, and other vegetables along with water or tomato juice. For one week, you will intake multiple bowls of cabbage soup and the assigned food for that day. To hold on the plan more than seven days is not recommended. Still, if you want to repeat the diet, suggest experts, you should wait two weeks between cycles.

The soup recipes can vary and so the nutrition fact too. But on average, one bowl cabbage soup consists of about 50 to 100 calories. It is also important to consider the fact that cabbage soup can be very high in sodium. If you take several bowls, it provides nearly 100% of your recommended allowance.

Cabbage soup diet is a very strict eating plan that allows specific food on certain soup along with the soup. You are allowed to have certain food items while completely restricted from some others.

The foods and drinks you are allowed to include in the cabbage soup diet are: 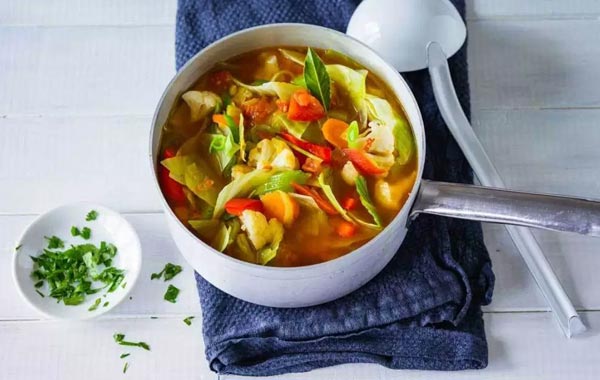 Every version of cabbage soup diet begins with the recipe for cabbage soup. The cooking of the soup is evolved over time. earlier, the soup was cooked for an hour which would destroy most of the nutrients in the cabbage and other ingredients. Recent recipes let the soup to simmer for no more than 10 to 15 minutes after brought to a boil. While making cabbage soup, keep in mind that the ingredients of the soup may vary according to a person’s choice.

Cut all the vegetables into small pieces. Take a large stockpot and sauté onion in a small amount of oil. Add the remaining vegetables and cover with water or vegetable cocktail (if desired). Bring the mixture to boil and then simmer it until vegetables are tender. If you wish, you can add salt, pepper, spices or hot sauces. You can also include other non-starchy vegetables like spinach or green beans. 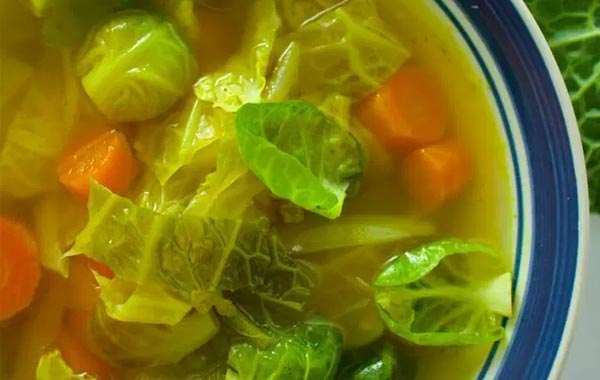 For better results, you should have cabbage soup as much as you want, with several meals.

Rules of the Diet or Diet Plan

There are certain rules for the cabbage soup diet or you must have a diet plan which would be like the following:

Day 1: only cabbage soup and fruits except for banana. Drinks can include water, sugar-free tea, coffee or cranberry juice

Day 2: cabbage soup and cooked or raw vegetables. No fruits, peas, corns, and beans. A baked potato with butter or oil is also allowed

Day 3: cabbage soup and unlimited fruits and vegetables. No bananas and potatoes

Day 4: unlimited amount of soup, banana and skim milk as the day is supposed to control the desire for sweets

Day 6: consume as much as cabbage soup, beef, and vegetables. Prefer leafy greens and no baked potatoes.

Day 7: unlimited brown rice and vegetables with unsweetened fruit juice. Soup must be consumed at least once in a day.

Your menu options are highly limited in this diet and you should not continue with the diet after one week. You can repeat it only after the gap of two weeks. Keep in mind that the cabbage soup diet plan does not include high-level workout or exercises. This is because the diet is a low-calorie one and you won’t have enough energy for the exercises.

Cabbage soup diet lacks scientific studies and so it is impossible to confirm the efficacy of the plan. Yet, experiences show that the low-calorie diet causes weight loss. You only have a limited number of choices in the diet though you are allowed to have unlimited soup, fruits, and vegetables. Hence you may not feel hungry, but do not get enough to maintain the weight of the body. The food items included in the diet are of low-calorie but good in fiber. Even though the cabbage soup diet lacks scientific proof, certain researches have shown that low-calorie diets can experience significant improvements in weight loss as well as metabolic health.

Cabbage Soup diet is an effective short-term weight loss diet which offers a result of up to ten pounds within a week. It has been around for a long time because of the amazing benefits it provides. It is the most beneficial weight-loss program ever organizes. Based on the assumption that cabbage is a negative-calorie ingredient, the diet revolves around large consumption of cabbage soup.

In order to digest the cabbage, the body needs more calories than what the cabbages had provided. In addition to the soup which includes cabbage, tomato, green onion, carrot, mushroom, etc. The diet also comprises various other foods. Although the cabbage soup diet is regarded as a fat diet, it has certain advantages over the other diets.

Precautions you need to take

It is true that cabbage soup diet helps you to lose your weight within a short period of time. But there are potential chances where its drawbacks may outbalance the advantages. One of the main problems with this diet is that it is only allowed for one week. And when you stop the diet, the weight may come back. Hence, it is not a meaningful weight loss solution even if you maintain a healthy diet after this.

Another problem is the chances to not provide enough nutrients. The food choices of the cabbage soup diet plan are severely limited and unbalanced. It is true that the food which is included in the diet comprises a lot of vitamins. However, there is a serious risk of vitamin and mineral deficiencies in the diet. In such cases, it is better to take multivitamin pills, though it can’t make up for the lack of calories and minerals.

Though this diet is simple, fast and cheap, it’s not easy for everyone to stick with it. The diet plan is safe for adults who are in good health conditions. The diet is not safe for those who are getting old, with diseases, eating disorders, or those who have special diets. In such cases, talk to your doctor or nutritionist before following the cabbage soup diet plan. One potential reason for this is they can have dangerous side effects even for healthy people. It can change your blood sugar levels and cause a nutritional imbalance.

The restrictive and repetitive nature of the diet makes you feel bored and is also difficult to sustain for a long time. Cabbage soup diet can provide quicker results. But a healthy gradual weight loss is beneficial and safer than this one.

Worried About Getting Sued? Here's the Ultimate Guide to Protecting Your Business...