At present, the usage of abbreviations and initialisms to express different meanings in the short term is quite common. Due to the extreme usage of such short terms regularly in online conversations and various social media platforms, people of all ages are getting habituated to use such short language terms. Many people think such short forms are abundant, and it is almost impossible to know about every one of them. Further, new and innovative short forms to express otherwise longer words and sentences are also being formed in a quite steady pace. The comparatively older generation is especially having a lot of problems to keep up with these latest abbreviations and acronyms to be able to understand a regular statement made online. There are many such short terms, and one of the most popular such terms used for quite some time now is smh.

For anyone unfamiliar with this term, the question that comes to mind naturally is, what does smh stand for? Is it an abbreviation, acronym, or initialism? The term smh is not an acronym when we consider the definition strictly. It is initialism instead, and many people have this misconception about smh being an acronym. Before we break down the meaning of smh, there are a few terms that you should probably know if you are not familiar with the terms used till now.

You probably know what an abbreviation means. It is generally the shortened form of a long word, denoted by initial letters in most cases. As for the term initialism, it is a particular type of abbreviation. On the other hand, acronyms are also short forms that are made up of letters to denote words. However, the acronyms itself form words. This is the primary difference between an abbreviation and an acronym.

It has been seen that most people tend to confuse initialism with acronyms. The reason behind this is both consist of letters only. However, the letters in acronyms can be pronounced as words, as stated before. In the case of initialism, the letters cannot be pronounced directly to form a word. However, each of the letters is enunciated in the order of their appearance. For example, the CIA and FBI are the initialisms that stand for the Central Intelligence Agency and Federal Bureau of Investigation, respectively. In these cases, the short forms cannot be pronounced as a word. On the other hand, an example of an acronym is NASA, which stands for the National Aeronautics and Space Administration. This is because, in this case, NASA can be pronounced as a word separately.

Returning to smh, even though many people it is an acronym, we can see it is not, as people enounce the term, like S, M, and H are pronounced separately one after the other, instead of pronouncing smh together.

SMH – What does it mean?

In the usage of the term in social media posts and texting, the actual SMH meaning is “shake my head” or “shaking my head,” to be exact. It was randomly started by teenagers, and now, it has been widely accepted as a term, which apparently, all the cool people use. Just like some of the other famous acronyms that have been circulating on the internet for a quite long time, such as LOL, OMG, ROFL, and LMAO, the usage of smh is also considered as a significant part of the funny online expression of meanings.

Initially, when the usage of acronyms or initialisms on the internet and social media platforms had just started, there were only a few worth remembering. At present, however, there are too many, and many people do not even have the idea to use these terms correctly. Smh has been on use in Facebook posts, Instagram Stories, and captions, WhatsApp statuses, and even casual texting for quite some time now. Many people also thought that smh is the initial of someone important. The confusion gradually cleared out, as many internet users prefer to Google anything that they do not understand, which is a good habit.

When searched in Google, the search results were prompt to show that smh is the common term that is used to express the words “shaking my head” or “shake my head” in different contexts. Usually, this term smh is used the most when someone is faced with a situation so annoying, funny or stupid, that no words can be expressed to show the proper reaction. In such cases, smh is used to describe the bizarre feeling of annoyance on stupidity, and the user is shaking his or her head in exasperation. The term smh is even used in two different modified terms, such as smfh and smmfh, which are subjected to make the conversation quite rude. The usage of smh is given below in a proper and detailed manner.

The search result of smh that is shown by Google after it is searched is quite interesting. The screenshot of the very first page that appeared in the Google search results is given below. 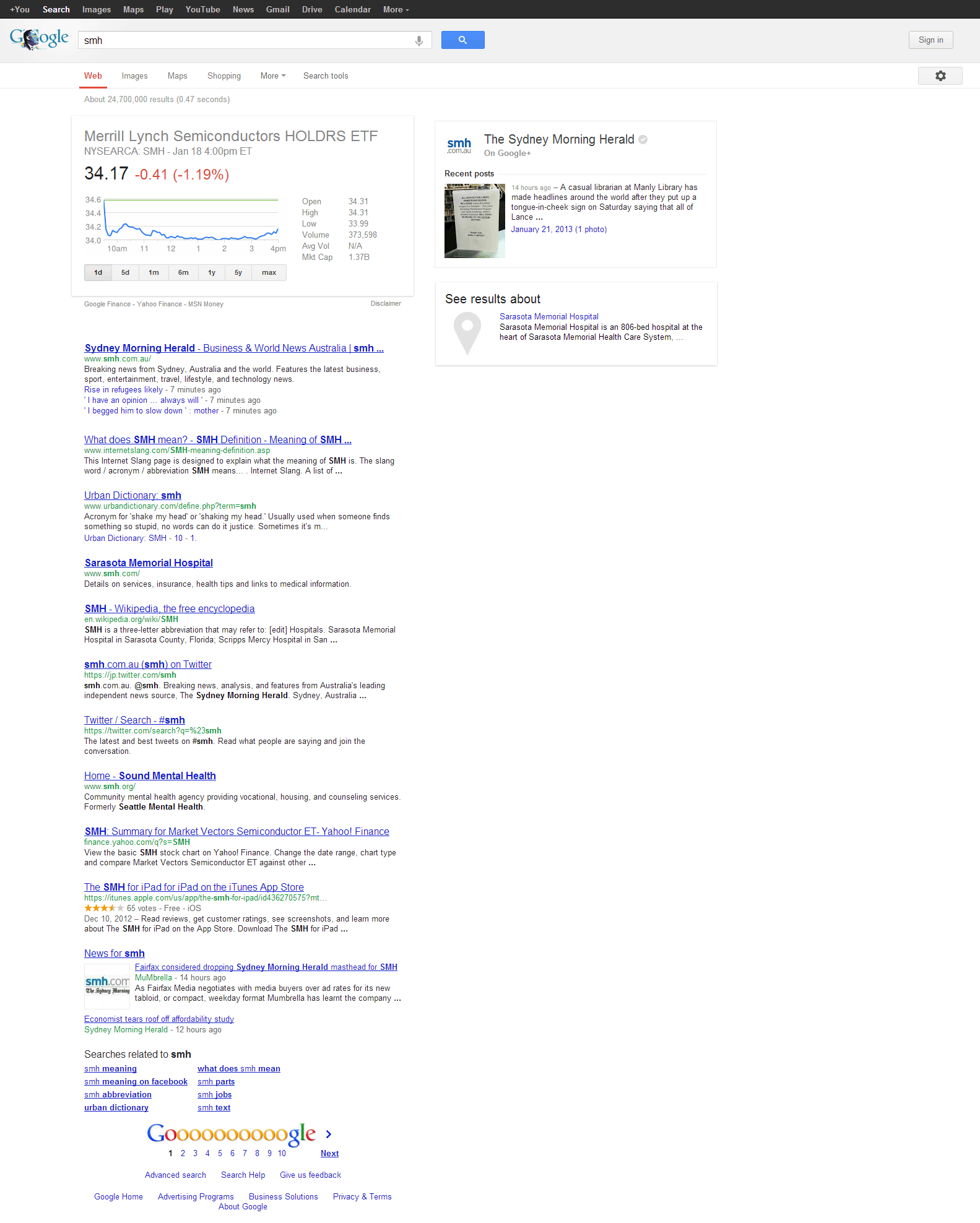 Completely separate domains such as smh.com have also been included in some of the results. The most common non-related information that was provided for smh was Sarasota Memorial Hospital, Sydney Morning Herald, and South Mental Health. Even though these results are entirely unrelated to the actual meaning of smh, many people who have no idea what smh stands for can get deviated from the real meaning if they see such search results.

It is clear from such searches that the usual Google search result of the term smh provides results that belong in different categories. There is a separate section in the Google search results, which can be considered as sections where search results are displayed intelligently. This section analyses a term and tries to come up with results that can have a vast diversity, which is the aim of Google as they strive to bring results from all cases possible. It is also a noting point that the search results that one will acquire today or the one that is being seen in the screenshot are not permanent at all. It has even probably changed by now. This is also a part of the intelligent search system that has been devised by Google.

So, if you are looking for finding out the correct meaning of the term smh by searching it in Google, you can be more specific. For example, you can type “What is the meaning of the acronym/initialism/short form smh in casual conversations?” in the search bar. Being specific about your search term will increase the chances of getting the right result. If the different meanings are subjective, then you need to be accurate as per your intent. You can also use the search words as “definition of smh” or “what does smh stand for” instead of merely typing smh. 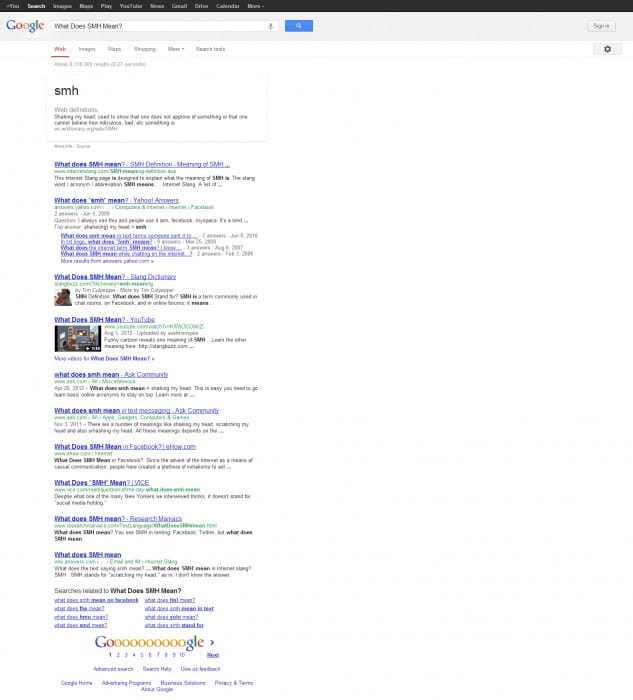 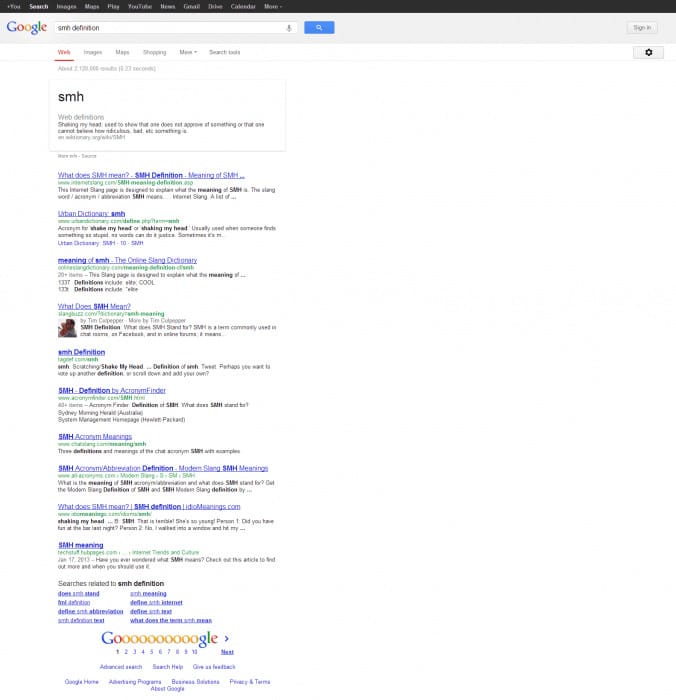 Hence, Google has to be used as per your needs. In the new century and era of ever-changing technologies, Google is like that all-knowing encyclopedia of an online format. If users can search adequately, then they will get the meaning of what they were searching for, like “shaking my head or shake my head” against smh. On the other hand, if the users are not very much specific, Google can return results such as the Sydney Morning Herald, Sarasota Memorial Hospital, South Mental Health, and so on.

So, by now, you should know the actual smh meaning.

SMH – How to use it properly in daily life?

As stated previously, the term smh is a popular initialism that is used in social media and online conversations to denote “shaking my head” or “shake my head.” This is mainly used by the user to show his or her annoyance, disbelief, disappointment, frustration, or disagreement.

There are various uses of the term smh in daily life usage on online conversations. It can be used as a response to the behavior of someone else. Smh can also be in response to any event, the current state of a place or situation, or regarding anything that makes you question the sanity of the news or statement. In real life, we often shake our heads when we are unable to react to a particular situation due to extreme annoyance or stupidity. In any case, where you shake your head to express the “no comments!” from your part, you can type the term smh in similar situations when faced over the internet.

Examples of the usage if SMH

Let’s consider that a football match is going on between two teams. Eventually, one of the teams conceded a goal due to a deplorable mistake, which ended up being the turning point of the match. As a fan expresses his tweet, he uses the term smh in the tweet to show how disappointed he is.

“Chelsea lost the game simply because of the stupid miss pass in the backward direction. What was the defender thinking! Smh”

Let us take another example. Your son has asked you to lend you his car, which he would drive on a carnival or party with his friends. You have said a firm no in text, and he has replied with the term smh. This means he is disappointed that he won’t be getting the car.

Your text: “I cannot lend you the car on that day as I have a preplanned appointment with the dentist. I will need it. Take public transport this time.

The right way to use SMH

There is no fixed rule regarding the use of this term. It can be used in all capital letters, or all lowercase letters, or a combination of both. Generally, all caps is used to show the level of annoyance or disappointment, and using the first letter in uppercase and the rest two in lowercase is used by the majority.

Since typing smh is way faster and better than typing the full sentence that you are shaking your head in annoyance or disbelief, it is an excellent way to express that stupidity feeling. However, do note that smh is only usable at informal and friendly conversations, that also with people of the group that is active on social media. It is useless to use it with someone who does not even know its meaning and will not understand what you meant. Hence, keep it in mind with whom and where you are talking for rightly using smh.

Open a popular social media platform and search the term smh. You will see that Instagram, Twitter, Facebook, and even Tumblr are filled with posts that contain the term smh. Read the posts, and you will get a good idea of its usage.

So, why do we need to use smh? It is a straightforward answer. While being online, we are looking for more relaxed and more comfortable ways to communicate with each other. Instead of typing a long sentence, we prefer to use short terms that depict the meaning and spares us the extra typing. The term smh is a specific example of such a case. Instead of typing that we are so annoyed or disappointed that we are shaking our heads, we use smh to express the same feeling. This is a faster, smarter, and more fun way of having an informal conversation.

TBT Full Form: What Does TBT Stand For

TBT Full Form: What Does TBT Stand For